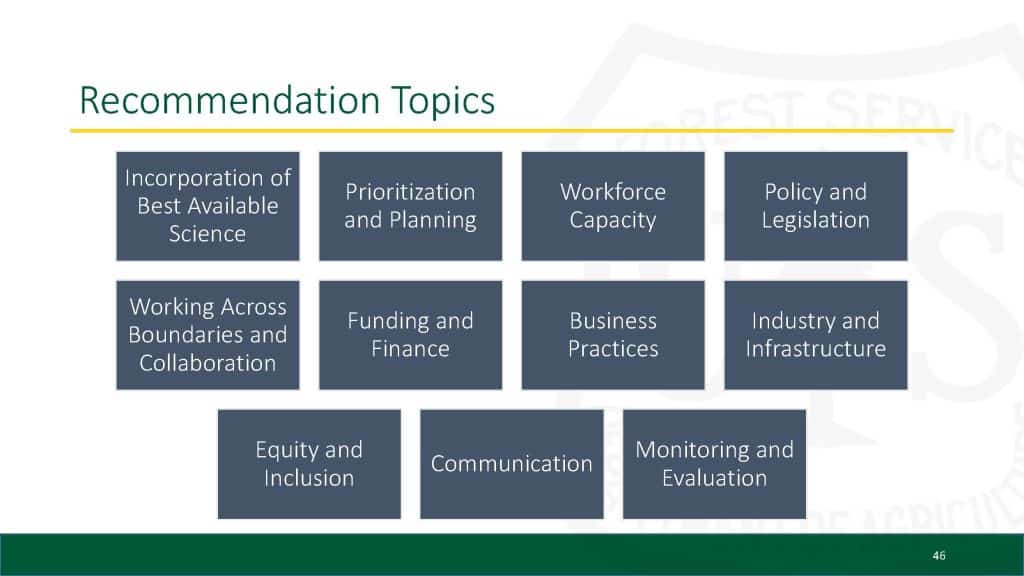 As part of the Region 2 Wildfire Strategy Roundtable presentations, Bill Crapser, the Wyoming State Forester, had some suggestions that struck a chord with me.

I believe we are setting up a world of winners and losers that will quickly devolve into battles that will erode political support for the programs, and destine us to failure.  Competitive programs that rely on grant writing abilities rather than needs, do not do justice to our forests and rangelands, and are inherently biased toward traditionally underserved communities.

From what the FS reps said, I feel like they have a handle on this.  There’s regular appropriations to fill in gaps, and there is the Admin’s concern for equity (although it’s not clear how exactly that will play out). It’s definitely something to watch out for though.. if we look at the pattern of CFLRPS and the Wildfire Strategy maps, there are many blanks.. usually where there aren’t many people and/or they didn’t make the proposal cut.  And of course, the Wildfire maps are focused on areas with the highest risk of transmission to the most populated communities, with some kind of equity overlay applied perhaps in the future.

Second, and most of interest to me since the only aspect of ARRA I was involved with was one silly kerfuffle. A forest had a project to reroute a campground road partially into a Roadless Area. The project was approved for ARRA funds (and announced) and then questioned by  the FS Roadless internal project review process.  Awkward for the Admin at the time. Entirely unnecessary (the road was rerouted for environmental reasons) drama. I guess the lesson was “alignment of different priorities and programs at all levels and sooner rather than later.”

Flashbacks of the 2010 Stimulus Legislation flash through my mind, with terms like “shovel ready”, and we need to show success early floating around.  Some of you will recall that after the ARRA programs, came the audits that several of us suffered through, and where several State Foresters lost their jobs, due entirely on rushing into projects with no clear expectations or sideboards.  This time around we need to take a breath, and make sure we all understand the rules of engagement before we dive in to the deep end.

First, we need to slowdown just a little and make sure we all understand what we are trying to do, how the different programs interface,  what the rules are, what reporting guidelines will be in place, and what the expectations will be for measuring success.

Next, we need to remember the old saying ‘that a high tide raises all boats”. We need to avoid the winner- loser paradigm wherever possible.

We also have to collectively work on work force development, think about non-traditional partners, and look at more efficient ways to get the needed work done.

I’m sure TSW readers participated in and observed ARRA programs.. what did you learn from those that we might apply to the current Wildfire Strategy? Other ideas?

via The Smokey Wire : National Forest News and Views https://ift.tt/shDEt4n